Walker Realty & The Salt Lake Board of Realtors® is pleased to present you with an overview of the third quarter Housing Report.

In Salt Lake County during the July-August-September period there were 3,811 single-family homes sold by Realtors®. That represents an increase of 15.38 percent compared to 3,303 homes sold during the same quarter last year.

Popular posts from this blog 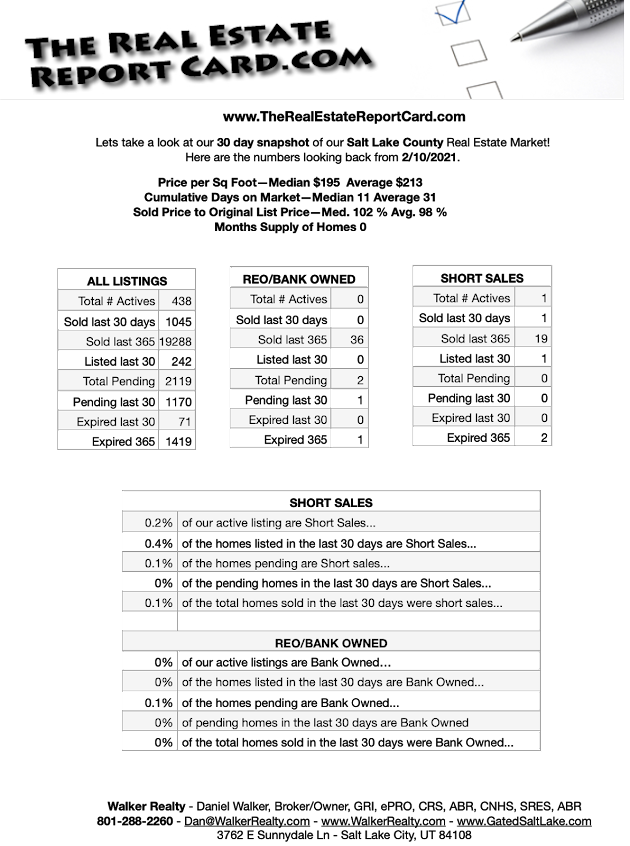 By Saxwalker - May 07, 2009
As citizens of the United States we have the Bill of Rights and the Constitution to protect us! What protects a buyer of real estate and what are their rights?  Let’s review them…keep in mind that local and state laws will have an impact on Buyer Agency and the nature of disclosure.  Also bear in mind the statute of fraud requires any real estate agreement to be in writing.  This offers the parties the greatest protection under the law. Buyer has right to... Choose neighborhood. Select a lender of their choice. Acceptable financing, closing costs, insurance, and interest rate. Exclusive Representation, to use the REALTOR of their choice. Choose their escrow company or closing attorney. Choose their home inspector. Inspect the property, to perform due diligence to their satisfaction Request repairs or corrections, to resolve objections. Cancel sale based on Due-Diligence, Financing, or Appraisal. Fnal walk-thru inspection. Take possession of the property with certain expectation
Read more

Let’s take a look at the 30 day snapshot of our Salt Lake County Real Estate Market! Here are the numbers looking back from 1/22/2018